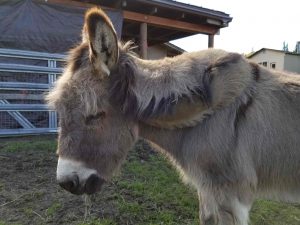 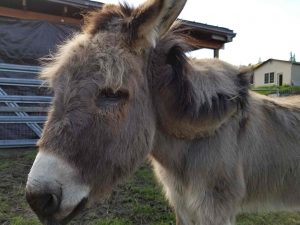 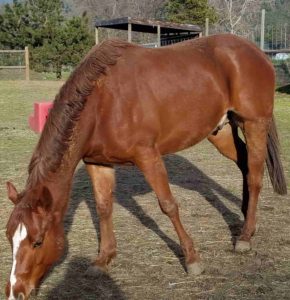 UPDATE:  TINO HAS BEEN ADOPTED !!!

Tino is a 5 yr old quarter horse gelding who absolutely loves to kiss and cuddle. From what we can gather of his story, he’d begun training and was somehow injured in the left shoulder area. The trauma of the injury caused his leg to rotate out severely. This injury is only visibly apparent when he stands or walks – when he trots or runs he appears normal. He shows no signs of pain, but the person who owned him at the time decided that it was easier to just take him to the feedlot, than to try and help him. Sadly, when Tino walked through the auction with his very visible gimp, he had no bidders, except the meat buyer.

This is when the story gets interesting….

Two ladies who’d attended the auction and seen that he’d received no bids, decided to walk by the pen where all the slaughter-bound horses were put. When they walked by, Tino came up to the panels and started nickering at them. He stuck his head through the panel for kisses, having no idea what his future held, he just saw humans and assumed that meant good things were going to happen. Lucky boy… they did.  The ladies melted, and bought him from the meat buyer.

Tino is now receiving physical therapy and deep tissue body work. We are hoping to get this sweet boy back to as “normal” as possible. He is responding well, absolutely loves the attention, so much that he doesn’t even require tieing when treated. Barbara, who is treating him, says he is already showing signs of improvement.  Tino is the first of our horses to go this special therapy program. Stay tuned ~ 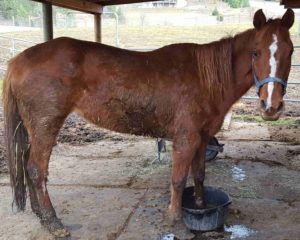 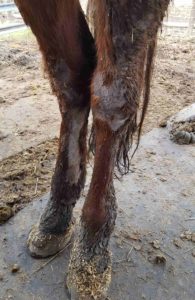 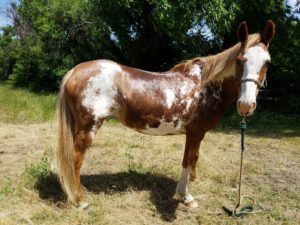 UPDATE: APACHE HAS BEEN ADOPTED !!!!

When she arrived: Apache is a Sheldon Mustang mare, approximately thirteen years old. When she first arrived at AAM we had our doubts that we would be able to halter her for several months – she was so stand-offish.  But once the halter went on, she quickly accepted being touched and her training literally took off!! 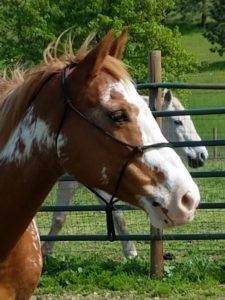 Progress.  Apache has now been on many off-property rides, dealing with dogs, tractors, garbage trucks and scariest of all…cows! She stands for farrier and trailer loads easily. 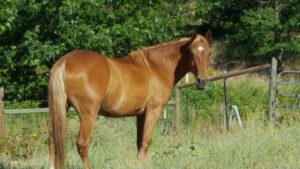 LUNA HAS BEEN ADOPTED !!!

Luna is a stunning Sheldon Mustang mare from South Dakota. She is 6 years old and is just beginning her training. She is a beautiful mover with a very smooth trot and lots of stamina, she will make a great trail horse and we are very excited to begin her through this process. 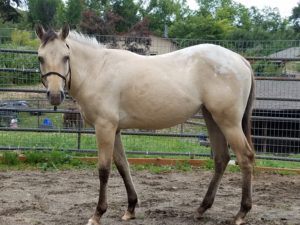 Gorgeous Chica is ready for a new home

UPDATE: Chica is doing great. She had the oral procedure to help her jaw fill  out normally. She leads, loads, ties and picks up her feet. She will be a big girl, 15+ h and ready for her new home!! She has the personality that will be capable of going any direction. Chica is a beautiful mover and wonderfully mellow. Contact us to meet this stunning filly 541.890.1274 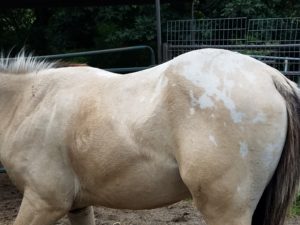 When she joined us: Chiquita is coming on 2 yr filly. She is one of the sweetest, mellowest babies ever! Unfortunately like so many animals, she was under the control of meth addicts. Her mother was severely underweight but gave all she had to her baby. After two months of constant food, clean water and healthy supplements we felt it was time to wean Chiquita. She was gaining weight rapidly while the mother was still struggling. The separation went surprisingly well, and mama started putting on weight and getting her enthusiasm for life back. Chiquita is going to be a big girl, she has stunning markings.

Buckskin all over, with beautiful white patterns on her back. You can’t see the markings under all that fur yet, but she will be a stunning mare. Her mama is an Appaloosa.  Chiquita was born with “parrot mouth”, which is generally a hereditary condition which the mother does not have. She was bred accidentally when she broke out of her pen in search of food and went to a neighbors house.  We are in the process of collecting funds and preparing for Chiquita to have oral surgery to improve the condition.  We have high hopes for this little girl, and we will do everything we can to give her a healthy future, she deserves it.

This mother and son pair arrived at AAM never having been handled by humans. They were underweight and loaded with parasites. The colt, Dakota, accepted human contact within a couple of weeks.  His mother Denali who is approximately 15, was more wary.  After focusing on their nutrition, and gelding Dakota, they were haltered and taught to lead.  Denali was offered for adoption as a companion animal, and the pair were adopted by “V” in northern Oregon. “V” was not an experienced horse woman, but she’d dreamed of adopting a wild mustang and adding that experience to her life’s goals.  After much communication, we decided that “V” was the right human for this pair. Her generous spirit and enthusiasm was exactly what they needed.  This new family is doing very well, and learning from each other daily.  We always look forward to updates, which “V” generously supplies for us. 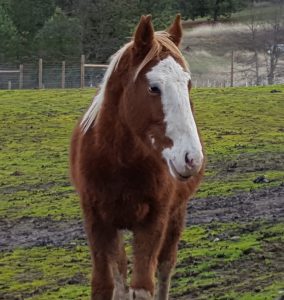 Romeo earned his name in the first week he arrived at AAM.  We estimated his aged to be nearing 2 years old. He’d never been touched by a human, and when he finally was he absolutely loved it! Romeo was adopted by Patty, and now lives in the Portland, OR area. The pair bonded instantly, truly a case of love at firt sight.