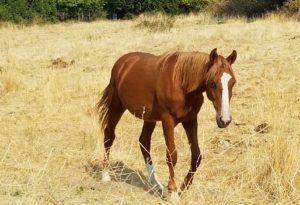 UPDATE: Nash is available for adoption. He leads. loads, picks up his feet. Nash will be a big boy,  Sheldon Mustang gelding. Contact us to meet this sweet boy 541.890.1274

When he arrived: Nash was born early in the morning May 12th, 2017. His mother Carmen traveled halfway across the country in December along with 8 other horses who were rescued from a flailing Mustang Rescue in South Dakota, to be taken in by AAM.  All the Mustangs had been seized by the Sheriff’s Department and were facing slaughter if not adopted. We told them we would take as many horses as they could fit into the trailer. So we ended up with nine.

There were over 800 Mustangs in need of homes or rescue.  This enormous undertaking was spearheaded by a remarkable woman named Elaine Nash.  This has been the largest Animal Rescue in American history.  We didn’t have to think twice about what to name this little man: Nash, of course.

Nash is very personable, curious and quite the comedian. He is extremely laid back and gets along with every creature he meets.